THE ULTIMATE GUIDE TO THE PDMP

What Is The PDMP? 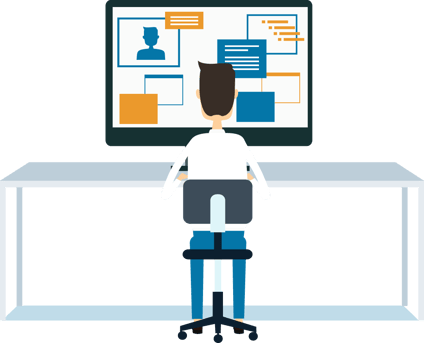 A PDMP is a state-based electronic database that tracks the prescribing and dispensing of controlled substances. At their most basic level, a PDMP collects information from a pharmacy about what controlled substances were dispensed, how much, to whom and by whom. This information is securely stored and can be accessed by a limited number of people, in a limited number of situations.

FOR EXAMPLE: A physician licensed in Ohio can access the Ohio PDMP to look up a patient they are currently treating. The PDMP allows the doctor to see what other controlled substances the patient may already be on, or has been on in the past, and in some states the system also allows a pharmacist to doublecheck a patient.

PDMPs and Their Effect on the Opioid Epidemic 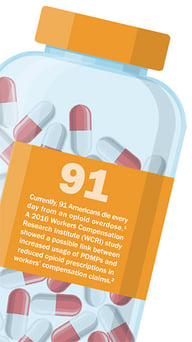 Since opioid misuse, abuse and overdose have become a nationwide problem, steps to counteract the crisis have been on the upswing. Response has focused on education, prevention and ensuring access to effective addiction treatments, while safely meeting the needs of patients.

Additional steps are being taken at the national, state and local levels - among them are improvements to PDMPs. If used properly they can serve as a powerful tool for states in fighting the opioid epidemic that continues to spread each year.

How have PDMPs become so impactful? By placing tight parameters around controlled substances and with more healthcare provider involvement, states with PDMPs have been associated with a decrease in the number of prescriptions for Schedule II opioids.3

While results still vary from state to state, PDMPs have also helped contain drug abuse and misuse over time.4 It’s clear that PDMPs may not be the only answer to the opioid epidemic, but these programs are helping to make small improvements each day.

Which States Participate in the PDMP?

Currently, 49 STATES, the DISTRICT OF COLUMBIA and GUAM all have operational PDMPs in place. MISSOURI remains the only state without a PDMP, however, several bills have been introduced throughout the last few legislative sessions to establish a PDMP, in some form, for the state. Until 2016, NEBRASKA operated a small, voluntary PDMP that recorded only emergency room visits. Recently a bill was signed into law that established a more comprehensive PDMP by 2018. When fully operational, NEBRASKA’s PDMP will require reporting of all dispensed prescriptions, controls and non-controls, and allow prescribers and dispensers licensed in the state to access the database.

The remaining 49 PDMPs vary in structure, utilization and interoperability. The only common theme among all operational PDMPs is the necessity of dispensers to report prescription information to the database. 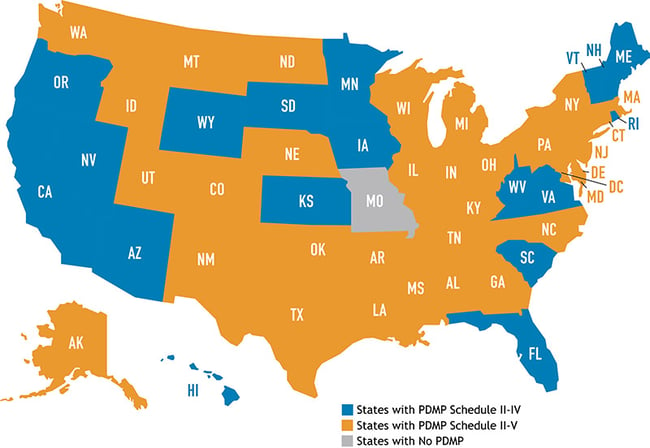 The 2016 legislative session saw a flurry of activity in states to expand their use of the PDMP. States like MAINE, MARYLAND and NEW MEXICO have all begun implementing laws that require prescribers to query the PDMP before writing a prescription for controlled substances. 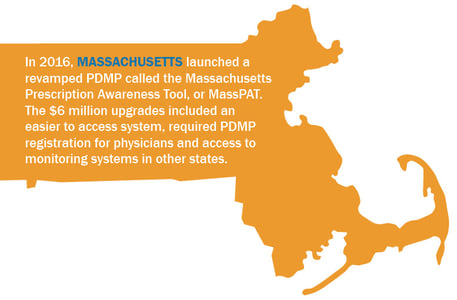 In 2016, MASSACHUSETTS launched a revamped PDMP called the Massachusetts Prescription Awareness Tool, or MassPAT. The $6 million upgrades included an easier to access system, required PDMP registration for physicians and access to monitoring systems in other states.

In 2017, states like GEORGIA, SOUTH CAROLINA, SOUTH DAKOTA, and VIRGINIA considered bills that would improve their PDMPs from required prescriber querying, increased dispenser reporting requirements and even requirements that dispensers query the PDMP in certain situations.

NEW HAMPSHIRE is one state being hit the hardest by the opioid epidemic. In 2014, New Hampshire launched their PDMP to collect information on prescriptions for Schedule II-IV. In 2016 the NH PDMP released their annual report that shows the PDMP is having positive effects on the opioid epidemic. Prescriptions for Schedule II drugs, such as opioids, is down by almost 13 percent and the number of patients that were flagged for potential doctor shopping decreased from nine a month to three a month.

NEW JERSEY operates one of the few state-based PDMPs that collects information from other states to bolster its database of information. The NJ PDMP gathers information from seven nearby states, including CONNECTICUT, NEW YORK and VIRGINIA, allowing prescribers and dispensers to pull comprehensive reports, not limited by state lines.

Bridging the Gap with InterConnect

The information contained in a state’s PDMP can help doctors and pharmacists ensure the safety of all patients when prescribing and using controlled substances. But as often the case, the state-run systems do not speak to each other, meaning the information in TEXAS’ PDMP might not be accessible to VERMONT’s PDMP.

PMP InterConnect, run by the National Association of Boards of Pharmacy, works to securely bridge this gap. The InterConnect system works to connect states PDMP’s, sharing information among the various systems. Currently, 43 states and the DISTRICT OF COLUMBIA are working with InterConnect to exchange prescription related data.

FOR EXAMPLE: InterConnect allows a doctor licensed in CONNECTICUT to log into the Connecticut PDMP and query their patient. The report pulls not only Connecticut records, but may also have information from NEW YORK, NEW JERSEY and VERMONT.

40 states, including DC, are currently active and 4 states are pending.5 Enabling providers and dispensers to access other states’ PDMPs ensures they are reviewing a comprehensive report on their patient’s controlled substance medication history.

Encouraging PDMP consultation before prescribing or dispensing controlled substances and mandating queries in high-risk situations have shown to be effective measures in ensuring proper use of opioids. However, queries alone aren’t enough without striving to make the reports the queries provide accurate, timely and comprehensive. In instances where pharmacies are filling prescriptions for opioids, going the extra mile might mean the difference between treating pain and serving the epidemic. It’s important to realize that most first time abusers get their pills from a friend or relative – the everyday street corner dealers are no longer the primary source of illicit drugs. There has to be some awareness surrounding prescribing patterns as instanced by the implementation of PDMPs across the country. Over the next few years as America faces the opioid epidemic head on, prescription drug monitoring programs will only become bigger topics of conversation and continue to grow and expand in each state.

Mandated use of the PDMP has shown significant reductions in doctor shopping and diversion.

Studies show the implementation of a PDMP is linked to a decrease of 1.12 opioid-related overdose deaths per 100,000 population.6 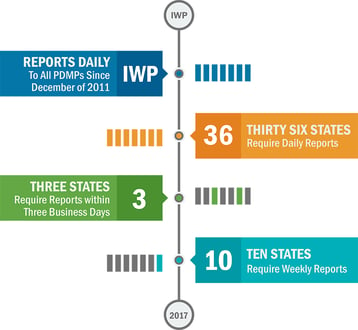 As a licensed pharmacy in all 50 states, IWP is responsible for reporting the dispensing of controlled substances to all active state PDMPs. And while states are implementing new PDMP rules, IWP is already going above and beyond, reporting daily to all the PDMPs since December of 2011 – far more frequently than the weekly to monthly reporting required by law.

At the start of 2017, reporting requirements varied by state for dispensers, with 36 states requiring daily reports, ten states requiring weekly reports, and three states requiring reports within three business days. Our licensed pharmacists have access to state PDMPs and are trained to complete reviews and take appropriate actions based on those findings when necessary. This is another opportunity for IWP to keep patients safe and to prevent abuse of medications.

During 2015 and 2016, IWP submitted testimony in support of MARYLAND’s efforts to expand its PDMP and worked with prescribers in MASSACHUSETTS and NEW YORK to assist them in the implantation of fill limits.

Better Patient Outcomes Matter to Everyone 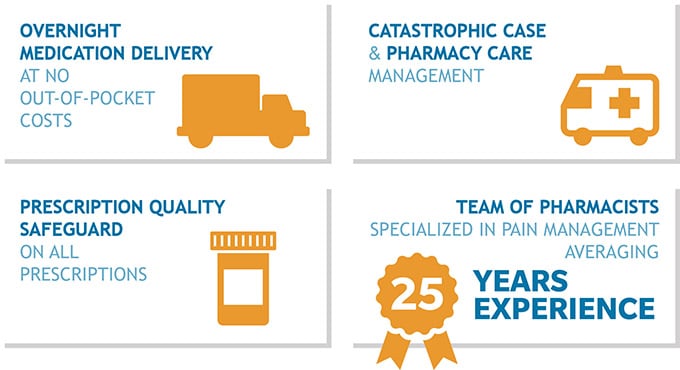