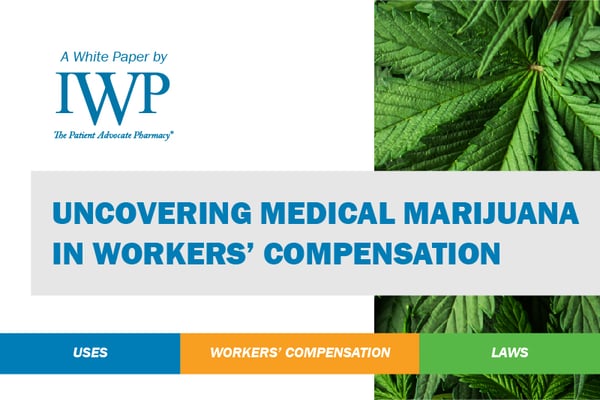 Marijuana has been listed as a Schedule I controlled substance by the United States government since the creation of the Controlled Substances Act back in the 1970s. Schedule I drugs are considered to be those with the highest potential for abuse and dependency and which have no accepted medical use. However, that classification has not stopped the expanded acceptance of marijuana as a potential medical treatment across the country. Over the last few decades, states have fought back against that classification as the country’s perspective of marijuana and its usage have evolved. While marijuana remains a Schedule I controlled substance on the federal level, the majority of states have passed laws that allow for the use of medicinal marijuana.

California was the first state to pass a medicinal marijuana law back in 1996, but in the years since, 36 states, along with Washington D.C., Guam, Puerto Rico, and the U.S. Virgin Islands, have joined them.i South Dakota and Alabama are the most recent states added to this list, having both passed legislation in 2021. Much like any legislative trend, every state’s approach to medical marijuana - from what diseases it can be used to treat to how a patient can purchase it - is unique.

With the majority of states allowing for medical marijuana, coupled with its cultural acceptance, one might assume that its health benefits are clear, but in reality, we really do not know that much This is partially due to marijuana’s continued designation as a Schedule I labeled drug, which significantly eliminates any chance to conduct and fund studies that look closer into marijuana as a medical treatment on a larger scale. Therefore, what we know about medical marijuana primarily exists
from small scale studies and anecdotal evidence.iii 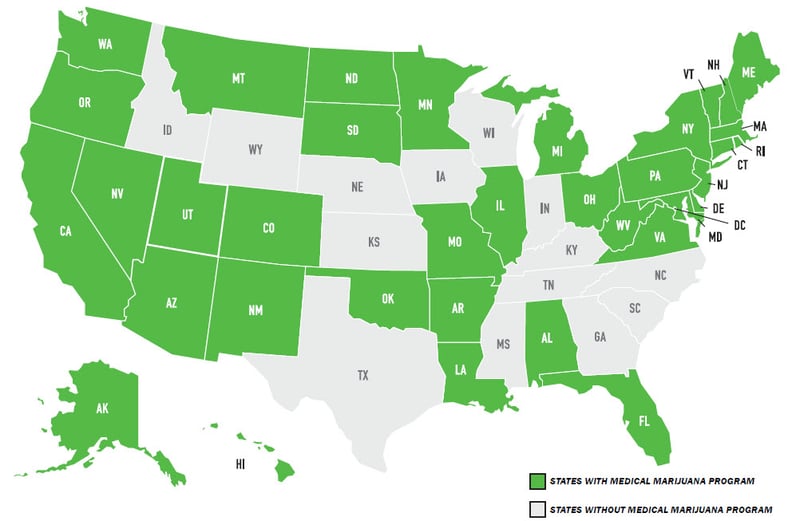 The U.S. Food and Drug Administration (FDA) has not approved marijuana for treating any health problems and there are currently no accepted medical uses.iv The U.S. Department of Health and Human Services (HHS) evaluated marijuana and determined that the drug’s chemistry is not known or consistently reproducible, and therefore no adequate safety studies have been conducted using marijuana at this time.

In June 2019, Stanford University released a study that found the legalization of medical marijuana did not in fact reduce the rate of fatal opioid overdoses as previously reported in 2014.v However, a study in August of 2019 by University of Massachusetts Amherst and Colorado State University researchers found legalization and greater access to recreational marijuana reduced annual opioid mortality in the range of 20% to 35%.vi

Although medical marijuana has not been given heavy attention from the FDA or other similar federal authorities, a recent study affiliated with the Center for Disease Control (CDC) shows that American health experts believe marijuana can be used as a medical utility. According to the study, published in May 2021, 73% of over 2,000 doctors, nurse practitioners, oncologists, and internists surveyed agreed with the use of cannabis as medicine to treat pain.vii According to the New England Journal of Medicine, this belief has remained consistent over time as over 70% of doctors agreed with the use of cannabis for medicinal purposes back in 2013.viii

With significant potential benefits, but lack of adequate medical evidence, medical marijuana exists in a relatively new space for the treatment of injuries - especially those in workers’ compensation. Supporters of medical marijuana believe the drug is critical for injured workers as a method for treating many common work-related injuries, including those with chronic pain. Recent data even suggests that in states that have legalized medical marijuana, there was a 6.7% decrease in workers’ compensation claims.ix As we find ourselves in the midst of a national opioid epidemic, the idea of a less addictive medication to treat pain long-term is increasingly appealing.

Some states, like Florida and North Dakota, tackled the issue head on in their laws, specifically excluding medical marijuana from workers’ compensation coverage. In contrast, Connecticut, Maine, Massachusetts, Minnesota, New Hampshire, New Jersey, New Mexico, and New York all relied on court rulings to clarify medical marijuana’s position in workers’ compensation. In 2021, Maryland legislators attempted to pass a bill that would have covered medical marijuana under workers’ compensation, but like previous bills in other states, it never made it out of the lower chamber. Most legislative attempts to address this question have fallen flat, leaving the courts to be the primary source to seek clarification.

Making a Case for Medical Marijuana

One of the first cases to tackle the issue of medical marijuana in workers’ compensation came from New Mexico. In Vialpandov. Ben’s Automotive Services and Redwood Fire & Casualty, the New Mexico Appellate Court found that medical marijuana was reasonable and necessary medical care for the injured worker’s chronic pain as defined by the state’s workers’ compensation statutes.x

Similar rulings were issued by the Connecticut Workers’ Compensation Review Boardxi in 2017 and the New Jersey Division of Workers’ Compensation.xii In those decisions, both Boards similarly found that medical marijuana was reasonable and necessary for the treatment of the injured workers’ injuries.

Assuming a court or law allows medical marijuana in workers’ compensation, additional questions are raised, most notably whether an insurer should be required to provide reimbursement for a drug considered illegal on the federal level.

With Limited Legislation, States are Addressing the Reimbursement Question through their Legal System.

In 2017, the Maine Workers’ Compensation Appellate Division found that a self-insured employer is not exempt from the Maine Medical Use of Marijuana Act (MMUMA) requirement that reimbursement be provided for costs associated with medical marijuana.xiv

However, less than a year later, the Maine Supreme Court weighed in on the topic and, in contrast to the majority of decisions being issued on the topic across the country, concluded that the state could not compel a carrier to violate federal law by mandating coverage for marijuana.xv

Although the state has fully legalized Marijuana, the appeals court ruled against workers’ compensation claims to cover medical marijuana in 2021. The court cited a ruling in 2020 to justify their position that treads carefully on the federal government’s current stance on marijuana.

In March 2019, the New Hampshire Supreme Court found that a workers’ compensation insurance carrier was wrong to deny reimbursement for the cost of medical marijuana when the employee was using it to treat pain associated with his work-related injury.xvi This was reaffirmed in 2021 when the court stated that it was “not persuaded” by the state’s arguments that an insurance carrier, under the federal Controlled Substances Act, could be prosecuted for aiding and abetting a marijuana possession crime if it has to reimburse.

In March of 2021, in the case of Quigley v. Village of East Aurora, the court ruled that the provider was required to reimburse the injured worker for medicinal marijuana purchases. In its decision, the court also noted that current laws passed by state legislature “did not intend to exempt workers’ compensation carriers from the obligation to reimburse injured claimants for their medical marijuana expenses.”xvi

While the courts in New Hampshire & New York left the more complex question of whether the federal law making marijuana illegal was enough for a carrier to deny reimbursement, they did clearly find that the state does not preclude an insurer from covering medical marijuana. In fact, the court stated that, had the legislature intended for carriers to be exempt from such a requirement, then they would have clearly indicated so in their statute, as was done in Florida.

Workers’ compensation medical treatments, including prescriptions, are often closely controlled by workers’ compensation divisions, regulations, and even insurers. With little scientific conclusiveness on the use and effect of medical marijuana, as well as the current federal stance on marijuana, states have struggled with how, when, and where to allow its use.

For example, in the Petrini v. Marcus Dairy, Inc. case from Connecticut, the injured employee tried dozens of different medications and a spinal cord stimulator to address his injury before his doctor prescribed medical marijuana. The most common acceptance of medical marijuana is for chronic pain treatment, and it seems to be widely accepted that treatment should not be the first line of defense, but rather an alternative when other traditional options fail. However, without clear guidance in laws and regulations, the question of when and where medical marijuana will be accepted in workers’ compensation remains uncertain at best.

It seems likely that medical marijuana will find its place in workers’ compensation in the immediate future given society’s increased interest in marijuana’s potential medicinal benefits. With a history of states becoming unable to reconcile medical marijuana under workers’ compensation through legislation, there will be a long, uncertain road ahead where much of its success, or failure, will be determined by legal precedent, state by state.

America's view of marijuana has shifted. Although the drug remains illegal on the federal level, states are fighting back against the classification as the country's perception of marijuana and its usage evolves - especially in workers' compensation.

Our newest white paper, Uncovering Medical Marijuana in Workers' Compensation, has recently been updated. It examines:

Download the white paper by completing this short form.